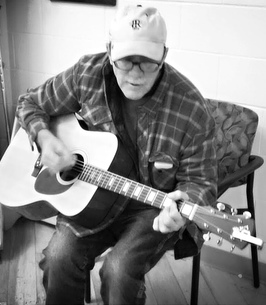 Frank was a musician whose immense love and passion for music was a major force in his life. He started playing the drums at age 9. And became a proficient drummer in his early teens earning his membership in the National Association of Rudimental Drummers. His love of music included many genres from classical, rock, gospel, the blues, to old school country. And he loved sharing this passion with others.

Through the years Frank played in various music groups and was a studio musician for several recordings. Later in life Frank grew to love playing the guitar citing Jimmy Page as a major influence. In the later years Frank said he just wanted to write songs that lifted people up & gave young people hope.

Frank was also an avid reader. He found solace & peace in warm days outside where he lived. Ultimately Boone became home for Frank where he found much love & support in the friends and relationships surrounding him. His experiences in life along with a special innate wisdom allowed for a deeper understanding of the human plight. This wisdom along with his wonderful sense of humor made him loved by all who knew him. Frank had a heart of gold. All in all it was often said of Frank that he was authentic and a genuinely kind soul. He will be missed immensely. But his spirit lives on in every life he has touched along the way.

Frank also had a tremendous love for his family and a special deep spiritual relationship with God demonstrated in his continuous renewed tenacious strength found in his faith throughout his life.

The family will be receiving friends at The First Baptist Church in Marion at 1:00 pm Tuesday, December 28th followed by the service at 2:00 pm. A graveside service at Oak Grove Cemetery will follow.

In lieu of flowers the family ask that donations be made to the Hospitality House of Boone in Frank’s honor: at https://www.hosphouse.org/donate or by mail at Hospitality House, 338 Brook Hollow Road, Boone, NC 28607